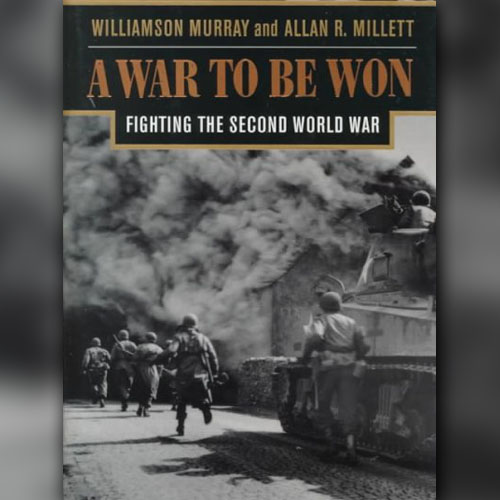 War to Be Won : Fighting the Second World War

In the course of the twentieth century, no war looms as profoundly transformative or as destructive as World War II. Its global scope and human toll reveal the true face of modern, industrialized warfare. Now, for the first time, we have a comprehensive, single-volume account of how and why this global conflict evolved as it did. A War To Be Won is a unique and powerful operational history of the Second World War that tells the full story of battle on land, on sea, and in the air.

Williamson Murray and Allan R. Millett analyze the operations and tactics that defined the conduct of the war in both the European and Pacific Theaters. Moving between the war room and the battlefield, we see how strategies were crafted and revised, and how the multitudes of combat troops struggled to discharge their orders. The authors present incisive portraits of the military leaders, on both sides of the struggle, demonstrating the ambiguities they faced, the opportunities they took, and those they missed. Throughout, we see the relationship between the actual operations of the war and their political and moral implications.

A War To Be Won is the culmination of decades of research by two of America’s premier military historians. It avoids a celebratory view of the war but preserves a profound respect for the problems the Allies faced and overcame as well as a realistic assessment of the Axis accomplishments and failures. It is the essential military history of World War II–from the Sino-Japanese War in 1937 to the surrender of Japan in 1945–for students, scholars, and general readers alike.

Used Condition: VG
Very Good. Book is in good condition. The only signs of wear are in the jacket (there are no tears or indentations).

History (54)
Show More Show Less
Join Waitlist We will inform you once this item arrives in stock. Please leave a valid email address below to be added to the waitlist
Free shipping for purchases over DKK500,00. *Note: applies to Denmark orders only
0%