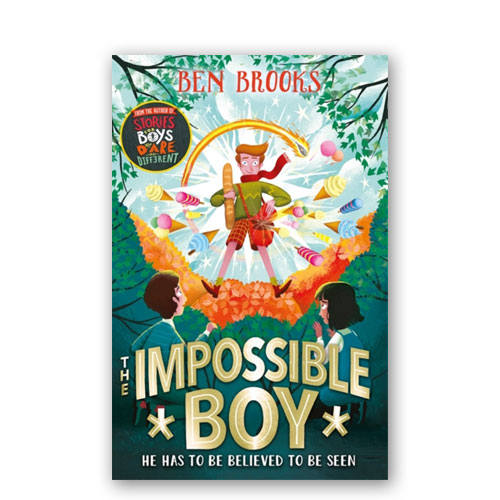 Believe in the impossible… A magical story celebrating the power of imagination, from the bestselling author of STORIES FOR BOYS WHO DARE TO BE DIFFERENT. Oleg and Emma entered their den to find a cardboard spaceship standing exactly where they usually sat.

Slowly, the front door opened and out stepped a boy. ‘My name’s Sebastian Cole,’ he said. ‘But you already know that.’When Oleg and Emma invent a new classmate called Sebastian, they are amazed when he appears – very much real – in their secret den.

Sebastian isn’t like the rest of their classmates. He’s never eaten pizza, he’s not sure what goose bumps are, and he has a satchel that seems to hold an endless supply of hot ice cream. But as the trio begin their adventures, more impossible things keep happening, from a runaway goat appearing at school to a sighting of some snowwomen walking down the road.

Things soon take a turn for the dangerous when the three friends are pursued by the mysterious Institute of Unreality, who want to capture and erase Sebastian, restoring order to the world. With the help of a cowboy gardener, an imprisoned scientist, and the rest of their class, can Emma and Oleg protect their new friend and keep the magic of the impossible alive?After inspiring countless young readers with tales of extraordinary people in the world around them, Ben Brooks’ first children’s novel is a magical adventure that celebrates friendship, the power of imagination, and ice cream.

Action & Adventure (354)Friendship (51)Holidays & Celebrations: Christmas & Advent (287)Humorous Stories (351)
Waitlist Request Thank you for your interest in this title. We will inform you once this item arrives in stock. Please leave your email address below.