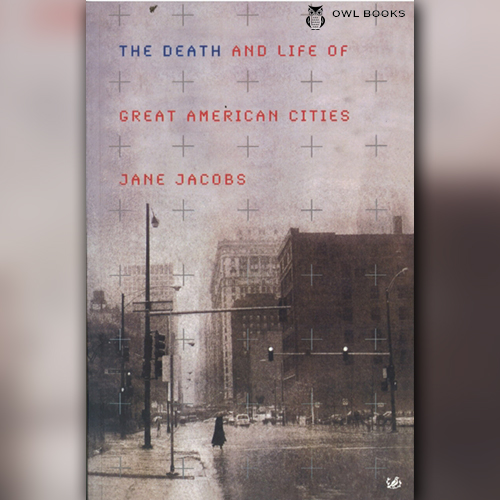 The Death and Life of Great American Cities

In this classic text, Jane Jacobs set out to produce an attack on current city planning and rebuilding and to introduce new principles by which these should be governed. The result is one of the most stimulating books on cities ever written. Throughout the post-war period, planners temperamentally unsympathetic to cities have been let loose on our urban environment.

Inspired by the ideals of the Garden City or Le Corbusier’s Radiant City, they have dreamt up ambitious projects based on self-contained neighbourhoods, super-blocks, rigid ‘scientific’ plans and endless acres of grass. Yet they seldom stop to look at what actually works on the ground. The real vitality of cities, argues Jacobs, lies in their diversity, architectural variety, teeming street life and human scale.

It is only when we appreciate such fundamental realities that we can hope to create cities that are safe, interesting and economically viable, as well as places that people want to live in. ‘Perhaps the most influential single work in the history of town planning… Jacobs has a powerful sense of narrative, a lively wit, a talent for surprise and the ability to touch the emotions as well as the mind’ New York Times Book Review

Architecture (5)History (97)
Waitlist Request Thank you for your interest in this title. We will inform you once this item arrives in stock. Please leave your email address below.