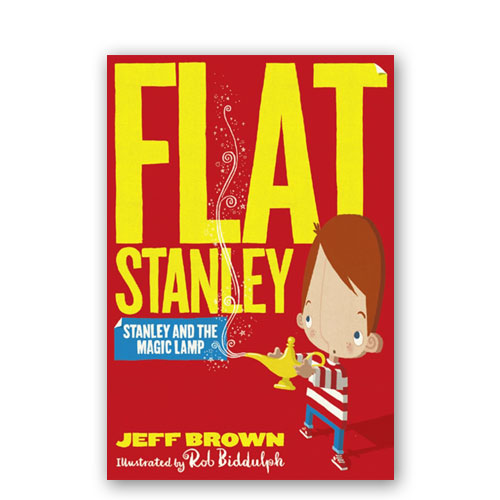 Stanley and the Magic Lamp

. . Stanley can’t believe it when he finds a genie inside a teapot.

He can have anything he wants!But everyone else wants a turn – and the wishes are causing chaos! Can he put things right before he runs out of wishes? Jeff Brown’s world-famous character Flat Stanley continues to charm half a century after he first found his way into print. Jeff Brown was a story editor and assistant film producer in Hollywood. He worked on the at The New Yorker and the Saturday Evening Post, and his stories appeared in these magazines and many others.

Jeff created the classic character Flat Stanley, whose adventures have been beloved by children around the world for more than 50 years. He died in Manhattan in 2003. Rob Biddulph is a bestselling and award-winning children’s book author and illustrator.

He won the Waterstones Children’s Book Prize for Blown Away and was nominated for the Kate Greenaway medal for GRRRRR! His other books include Odd Dog Out (Aug 2016) and Sunk! (March 2017).

Classics (2)Humorous Stories (10)Readers (1)
Waitlist Request Thank you for your interest in this title. We will inform you once this item arrives in stock. Please leave your email address below.