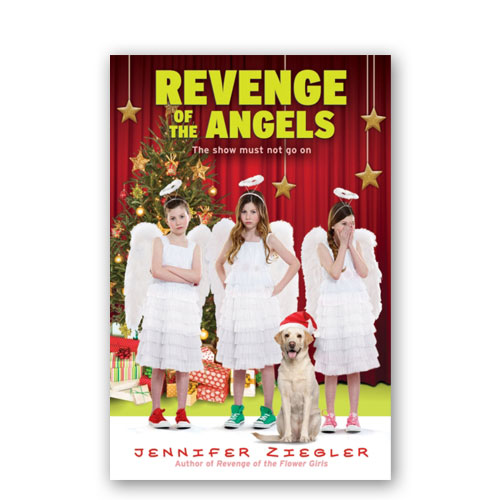 Revenge of the Angels

The Brewster triplets from Revenge of the Flower Girls meet The Best Christmas Pageant Ever, in a new, sweetly hilarious holiday story from Jennifer Ziegler!

The Brewster triplets, Dawn, Darby, and Delaney, usually love Christmas. Decorations, singing carols, seeing Aunt Jane and their favorite neighbors, hot cocoa, and presents–what could be better? But this year nothing is going right, starting with their local Christmas pageant. They practiced looking wise and stroking fake beards so they could play the three Wise People, but what did they get cast as? Angels – and just because they’re girls! Totally not fair.And things are going from bad to worse.

No Aunt Jane, no megaphone, no Mom or Lily because of the snow–and someone is stealing decorations (and baked goods!) from their neighbors’ houses. The girls don’t want this to be the worst Christmas ever, but can they fix the pageant, solve the mystery, find their dad a new couch (it’s a long story), and recover their holiday cheer?

Holidays & Celebrations: Christmas & Advent (293)Humorous Stories (351)
Waitlist Request Thank you for your interest in this title. We will inform you once this item arrives in stock. Please leave your email address below.