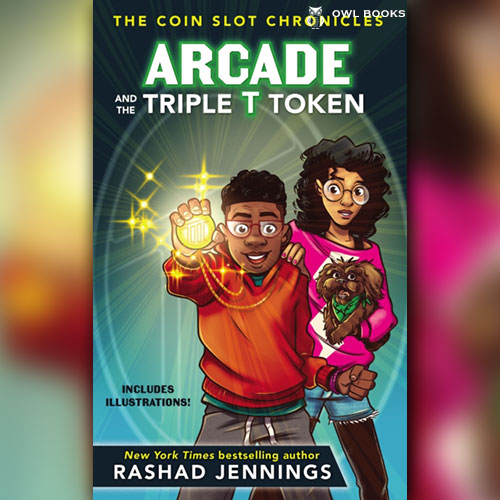 Arcade and the Triple T Token

In Arcade and the Triple T Token, eleven-year-old Arcade Livingston has a problem. Several, actually. The Tolley twins, a.k.a.

neighborhood bullies, are making Arcade’s move to a new city even harder than it needs to be. They expect him to do their research papers and interactive displays for the sixth-grade career expo’s theme: “What do you want to be when you grow up?” Besides doing their work, Arcade doesn’t even know his own answer to that question. While at the library-Arcade’s favorite place to chill-a mysterious old woman gives him a golden arcade token that grants him a unique gift.

A gift that allows him to time travel between different places including his own future. From sitting in the dugout with Babe Ruth, to hanging on to the back of a bucking bull, to performing life-saving surgery on a dog, Arcade has no shortage of adventure! Together with his older sister, Zoe, Arcade explores life’s biggest thrills and challenges, and the two also have a big mystery to solve. Who is the rightful owner of the incredible Triple T Token that leads to such astounding adventures?Arcade’s circle of friends begins to widen as the Triple T Token hangs from his neck.

Pulsing. Beckoning another adventure. The question for Arcade, Zoe, and their new friends is no longer, “What do you want to be when you grow up?” It’s, “Where will we go next?”Read as part of the series or as a stand-alone novel! Arcade and the Triple T Token is the first book in the humorous and imaginative Coin Slot Chronicles series by New York Times bestselling author, former NFL running back, and Dancing with the Stars champion Rashad Jennings.

ABOUT THE AUTHOR
Rashad Jennings went from being a fifth string running back in high school to becoming a professional NFL running back for the Jacksonville Jaguars, Oakland Raiders, and New York Giants. Through the eyes and adventures of tween Arcade Livingston, Jennings teaches readers to value the power of friendship and imagination in their own lives, and to never underestimate the potential of an underdog.

Humorous Stories (351)
Waitlist Request Thank you for your interest in this title. We will inform you once this item arrives in stock. Please leave your email address below.